How the Small Intestine Works 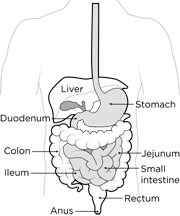 The small intestine has three parts:

After food is processed in the small intestine, it passes into the large intestine (also called the large bowel or colon). The large intestine, which is about 5 feet long, extracts most of the water from the food and distributes the liquid to the body; the remaining material passes through the colon and out of the body as feces (stool).

Learn more about the intestine.

Your gift helps ensure that every child in our region who needs the care of Seattle Children’s expert doctors and nurses can get it.

Please give as generously as you can.