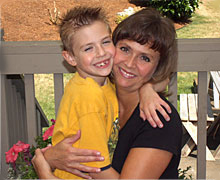 Lucas Moe used to throw lots of big tantrums over small things. Putting on his clothes. Picking up a toy. Everything seemed to turn into a battle of wills with his mother, Christie Moe, who would collapse at the end of the day exhausted.

His fretful moments became fewer and further between after he and his mom started Parent–Child Interaction Therapy (PCIT) at Odessa Brown Children's Clinic.

Talking to Christie through a “bug” in her ear, he coached and gave encouragement. For example, “Let's say, ‘Please give me the apple,’ and praise him if he follows directions.”

“It's exciting to watch parents become more confident in their parenting skills,” McDonell says. “Christie can confidently praise and limit Lucas's behavior, and Lucas has learned that following directions is fun.”

Moe, who also has a daughter, Holly, admits she was skeptical about PCIT at first. But she and her husband, Dale Moe, started seeing a change in their son after only two sessions.

Shortly after their PCIT session, at a picnic, Christie held up two fingers, indicating that Lucas had two choices – pick the hot dog up from the ground or take a time-out. She was secretly thrilled when he said, “Aww, OK,” and picked up the hot dog.

“It works,” she says. “He doesn't see me get frustrated. He sees me stay calm. We don't have the power struggles. I'm in control.”