Doctors at Seattle Children’s hope to improve care for epilepsy – or recurring seizures – by using the latest treatment options, like laser ablation, and by researching ways to use new imaging techniques to guide surgery.

Because laser ablation for epilepsy is still fairly new, we are still learning about how it can help children with epilepsy. Researchers at Seattle Children’s are working with others around the nation on studies to learn more. These studies:

During surgery, we carefully avoid harming the most critical areas of the brain, such as those important for language. Sometimes, this limits what we can do during surgery.

Electric “brain mapping” (electrocorticography) is the standard way that doctors find areas of the brain that control important functions. Standard brain mapping is done in 1 of 2 ways:

Dr. Jeffrey G. Ojemann and his team are studying new ways to use another brain mapping method, called functional magnetic resonance imaging (fMRI). During an fMRI scan, we ask your child to do something, like tap their finger, look at pictures, read or listen to words. This allows us to see which parts of their brain are being used during these tasks. We use fMRI on children of all ages. The tasks we ask them to do are tailored to their age and abilities.

Seattle Children’s works with other groups to set standards and find new ways to use fMRI that are best for children. We hope fMRI will improve treatment for seizures by giving us more details before surgery about which brain areas are used for the most important functions.

Learn how doctors used fMRI to remove a tumor – and preserve Kira's voice. 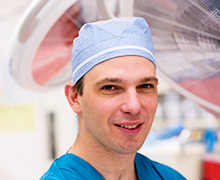 Q: What is the goal of fMRI research?

A: We want to learn if brain mapping by fMRI can help us find the areas of the brain that control the most important functions. Having this information will help us avoid those important brain areas while still being able to operate on the brain tissue that is causing seizures.

Q: What functions of the brain can be mapped?

A: Language is one important function that we try to map. We know language is very complicated. Some language tasks are used for brain mapping and seem to keep surgery safe.

But we know that language involves reading, understanding, speaking in words and sentences and many other things that we take for granted. We need to know more about how epilepsy and surgery for epilepsy interact with language abilities.

We want to know how epilepsy and treatment for epilepsy affect these different types of memory. Our research is trying to find out how epilepsy changes the way the brain makes and recalls memories.

Personality and other things that are very important to who we are cannot be easily mapped onto 1 part of the brain.

Although surgery can affect a child’s behavior, the effects of seizures and seizure medicines seem to play an even greater role in their personality.

Image that combines data from
MRI, fMRI, PET and electrodes
placed on the brain

To get the most detailed view of your child’s brain, our epilepsy team uses advanced technology to combine (co-register) different types of images and look at them all together at the same time. The combined images help us carefully plan and perform surgery to remove target tissue without harming the rest of the brain.

We can combine very detailed (high-resolution) images from:

Scans done before surgery are loaded into the image-guided system we use in the operating room. Scans your child had somewhere else, such as at their referring doctor’s office, can be used if the image quality is good enough. This means we may not need to repeat scans that your child has already had. The scans are aligned to give surgeons a more complete view than they would have with separate scans. 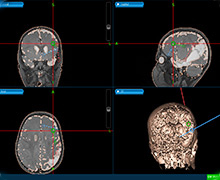 Precise image-guided surgery for epilepsyUsing the image-guided system, we can place electrodes on your child’s brain and take out tissue with great precision. We can also record details of the surgery itself, including the precise location of electrodes.

In the future, co-registered images may allow us to make a detailed 3-dimensional model of a child’s brain to help plan surgery in more complex cases. Image co-registration will also allow us to study the relationships between a child’s imaging data, EEG data, actual brain tissue and surgery outcome – all of which will help us improve epilepsy care.

After we remove brain tissue during surgery, Dr. Ghayda Mirzaa studies the tissue samples to learn more about the links between genes and epilepsy. Mirzaa is a medical geneticist and pediatric neurologist at Seattle Children’s Center for Integrative Brain Research. He checks the samples for genetic changes (mutations) linked to epilepsy.

We can compare genetic findings with images of a child’s brain. This improves how we interpret the images. Over time, this work will help us tell which types of imaging are most useful for understanding a child’s condition and planning treatment. For some children, this could mean a way to get the information using noninvasive methods. When invasive methods are necessary, it could also mean using them in much more targeted ways.

With genetic research, Seattle Children’s doctors and scientists are also working to answer questions like:

We are committed to research that improves epilepsy treatment and quality of life for children affected by seizures.