Taking a Stand for Health Maleah Davis, 17, checks in with Amy Andersen, a nurse practitioner at the Garfield High School Teen Health Center that is staffed by Seattle Children’s clinicians. Having full-service clinics in high schools makes medical and mental health visits convenient, accessible and top-of-mind for an age group that may not otherwise seek care.

Just two days after Dr. Ben Danielson started his first job at a community clinic in southwest Seattle, he saw that the path to wellness extended far beyond the healthcare system – and his medical training.

“One of my first appointments was with a mom who was having trouble breastfeeding her newborn,” Danielson says. “I came out of my residency knowing how to intubate a child and do a spinal tap, and I could definitely dial up and down their electrolytes, yet I struggled to help her once I realized that the real culprit was poverty. What she really needed was better nutrition and less stress. But those things were out of her reach unless she made hard choices with her food stamps and found someone to advocate for her while she was under threat of being evicted.”

Danielson and many others continue to wrestle with a very thorny conundrum: When only 20% of someone’s overall wellness is determined by their medical care and 80% is influenced by social, economic and environmental factors, how can we improve the health and well-being of low-income, ethnically diverse kids and their families?

Micki Flowers (left) and Cynthia Huffman are longtime supporters of Odessa Brown Children’s Clinic. Together, they started a fundraising guild that supports the clinic’s vision to be an innovation and learning center where new models of care will be developed and tested and successful practices disseminated to primary care providers across the state and beyond.

“Seattle Children’s works every day to make a difference in the lives of kids – everything from health advocacy at the legislative level to injury prevention and adolescent wellness,” says Cynthia Huffman, a member of Seattle Children’s Hospital Board of Trustees. “But we’re realizing that we can’t improve health outcomes for disadvantaged children and families in our region without doing something revolutionary.”

Huffman notes that a large body of research evidence confirms that a child’s health is directly related to their income, race and ethnicity. And poor health in childhood can affect the length of a person’s life. In fact, adults in low-income communities in King County live 10 years less than people in wealthier communities.

Though Danielson is quick to point out strengths of low-income communities – rich cultural traditions, deep respect for elders, unique ways of representing beauty and creativity – he also explains that kids from low-income and minority families have greater exposure to a litany of toxic stressors. Things like not having adequate housing or food, being neglected at home, being exposed to the trauma of violence or having an absent parent can steadily erode their well-being and change the course of their lives for the worse.

In 2016, Huffman and the rest of the board voted to expand the strategic direction of Seattle Children’s to take a more hands-on role in the health of our community. It’s a bold move that can only be accomplished with generous philanthropic support. If we're going to improve the health of all children in the places where they live, play and learn we all must step forward and invest in their future. 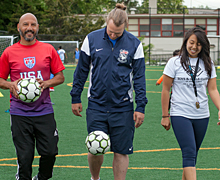 “When we compare patient demographic data between the year 2000 and 2016, we see that families we’ve taken care of for generations are now living farther away in south Seattle and south King County,” explains Danielson, the clinic’s medical director. “For many, coming to an appointment means several bus transfers and a two- to three-hour commute one way.”

Recently, Seattle Children’s board approved the creation of a second, larger Odessa Brown clinic near a light rail station in south Seattle. The location recognizes that transportation can be a barrier to healthcare for disadvantaged families. The new facility’s larger footprint will better accommodate the clinic’s rapidly growing patient population.

The expansion dovetails with Seattle Children’s strategic focus on community health. Danielson sees the intersection as an opportunity to create a new model of primary care that addresses the social, economic and environmental factors that affect families.

This vision celebrates families for their grit in the face of daily adversities. It also delves deeper into nonmedical factors, such as housing, nutrition and safety – a model that requires clinicians to listen more carefully to understand the root cause of each family’s concerns rather than jumping too quickly to solutions designed to fix a purely medical issue. And it relies on partnerships with social service organizations that have expertise in areas that are beyond the scope of Odessa Brown’s medical practice.

In 2008, Seattle Children’s developed a partnership to help low-income families address legal barriers that threatened their health and well-being.

“Before the Washington Medical-Legal Partnership was formed, Seattle Children’s, Harborview Medical Center and Northwest Justice Project worked in their separate silos to help families solve health-related legal problems,” says Suzanne Petersen Tanneberg, a vice president at Seattle Children’s and member of the hospital’s community health workgroup. “Once we got them working together, they used their combined expertise to resolve issues quicker and much more effectively.”

Depressive disorders are the number two reason adolescents and teens are admitted to Seattle Children’s – a statistic that underscores the need for earlier, community-based interventions for mental- and behavioral-health issues. Tanneberg says Odessa Brown’s current model of offering school-based care in several underserved elementary and middle schools is a safety net that decreases hospitalizations.

At Odessa Brown’s teen clinic at Garfield High School, junior Maleah Davis, 17, says being able to touch base frequently with clinic providers – including nurses and a mental health counselor – is a lifesaver. “I’m worrisome all the time and angry about things that happened when I was younger,” she confides. “Some people see me as a lost cause, but the clinic understands me and helps me stay focused when I’m down. I’d probably be really bad without them – worse grades and maybe I wouldn’t even graduate. Instead, they support me in making my dreams come true.” 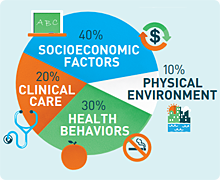 Clinical care accounts for only 20% of our total wellness.

The new clinic will also function as a testing ground to develop best practices that improve health outcomes for kids. To measure whether the strategies are working, the team will work closely with Seattle Children’s community health researchers.

Odessa Brown will play a central role in Seattle Children’s new focus on community health, says Dr. Brian Saelens, whose research aims to help kids and families engage in behaviors that prevent future health problems. “Our goal will be to identify and develop successful practices that can be implemented by others in our region and beyond. We want our impact on kids’ health to extend to children we’ll never meet.”

“We may not be able to solve poverty, but we can help provider richer solutions.”

Saelens is clear about the challenges and rewards of Seattle Children’s focus on community health.

“We may not be able to solve poverty, but we can help provide richer solutions,” he says. “If we can figure out how to help kids be healthy and stay in school, if we can help kids prosper, if we can keep kids on the path toward successful futures – what better investment is there?”