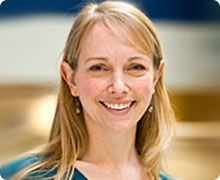 Dr. Casey Lion’s research aims to overcome a harsh – and sometimes overlooked – reality: Children from low-income minority groups often have worse medical outcomes than kids who are white or from higher-income families.

Minority children are more likely to die of asthma, leukemia and other diseases. They’re less likely to receive adequate pain medication when they’re in the hospital. Their quality of life doesn’t improve as much after treatment. And, perhaps not surprisingly, they and their families have less trust in physicians and the healthcare system.

“When you think of health disparities, you usually think of problems with unequal access to healthcare, or the impact of things like poverty and unsafe neighborhoods,” says Lion, a pediatrician at Seattle Children’s and a researcher in the Center for Child Health, Behavior and Development. “But there are disparities in the healthcare children receive, even after they’re in our hospitals.”

Lion is preparing to launch an innovative project to better identify what contributes to these disparities – and test a new way to overcome them.

Studying How Providers Can Influence Disparities

Backed by a National Institutes of Health K award – a grant that helps young researchers establish their careers – Lion will first try to identify which factors healthcare providers can influence to improve outcomes for low-income and minority children.

Lion’s team will survey minority and low-income parents whose children are hospitalized. The survey will gauge things like parents’ trust in physicians and the healthcare system; the quality of communication they receive from doctors and nurses; and the families’ self-efficacy, or confidence in their ability to interact effectively with health professionals.

Then Lion’s team will gather data on those children’s medical outcomes, and look for associations between these outcomes and the survey’s findings. For instance, Lion suspects that children may have worse outcomes if the providers can’t effectively communicate with parents, perhaps because they don’t speak fluent English.

For instance, Lion suspects that children may have worse outcomes if the providers aren’t effectively communicating with parents, perhaps because they aren’t getting parents to ask questions or adequately assessing how well parents understand their child’s health issues. This could limit the parent’s ability to care for their child after they go home from the hospital.

“We can’t change things like demographics or a parents’ educational background and it’s going to take time to address the fundamental causes of health disparities,” Lion says. “In the meantime, we want to see which things that may be contributing to disparities we can have an impact on now,” Lion says.

Next, Lion will investigate whether patient navigators can influence these mediators and potentially improve outcomes. Patient navigators are charged with things like explaining the different aspects of care to patients and their families, helping them communicate with doctors and nurses and encouraging families to take an active role in care. Navigator programs have improved how low-income and minority adults with cancer adhere to their treatment and made them more likely to get further cancer screening.

Lion will design and test a navigator program tailored to a broad population of pediatric patients and their families. She plans to match participants with navigators who share their cultural background and speak their native language, for a focused intervention that will mainly happen while patients are in the hospital. Lion’s team will monitor whether this improves communication, trust and other key variables. If the navigator program improves outcomes, Lion hopes to apply for a larger NIH grant to test a similar program on a bigger population.

“Navigators could be a cost-effective way to help these patients today and build a foundation that improves their healthcare throughout life,” Lion says.