Our researchers are helping more kids beat one of the deadliest pediatric cancers, giving new hope to patients nationwide. Katie Belle, now 11, participated in a clinical research study that helped her beat high-risk neuroblastoma. But the intense treatments also have long-term side effects. Fortunately, she loves swimming and competes year-round, an activity that helps keep her healthy.

Katie Belle was just 3 years old when Seattle Children’s doctors removed a baseball-sized tumor from her abdomen – and discovered that she had a potentially fatal cancer called neuroblastoma.

Neuroblastoma starts in nerve cells and can spawn tumors throughout the body. Because Katie’s cancer had spread to many places, her doctor, Dr. Julie Park, classified it as “high-risk.” When Katie was diagnosed in 2009, the best chance at a cure involved intense chemotherapy, radiation and a stem cell transplant. Even then, only about 35% of kids with high-risk neuroblastoma survived for more than five years.

Park invited the family to join two research studies that she hoped would improve these odds. One study involved an experimental regimen that included even more chemotherapy and a second transplant; the other study tested a new immunotherapy drug.

The research was part of Park’s decades-long push to help more kids beat neuroblastoma, and it highlighted a core dilemma: The most effective neuroblastoma treatments are brutal, toxic and often leave children with side effects like infertility, hearing loss and getting another cancer.

Even as Park was hopeful that the new approach would help, she wanted to move beyond throwing more and more toxic treatments at kids. This commitment to raising the bar on care has helped Park dramatically improve survival for neuroblastoma – and it fuels her current drive to develop reprogrammed T cells that find and destroy neuroblastoma cells, with far less chemotherapy and radiation.

“We’re excited that our research is improving survival,” Park says. “But we have a long way to go – these kids deserve treatments that are less toxic and more effective.”

Park started caring for children with high-risk neuroblastoma 25 years ago, when only about 25% of them lived for more than three years after treatment (a key milestone because most relapses occur within three years). So she started leading studies of new treatments via the Children’s Oncology Group, a nationwide research group that brings together cancer experts to find cures.

In the late 1990s, pilot studies showed that it was possible to give children chemotherapy and two stem cell transplants. Park and the Children’s Oncology Group launched clinical trials to study whether a regimen including two transplants and immunotherapy could make it less likely that kids with neuroblastoma would see their cancer come back.

During 18 months of treatment, Katie spent more than 200 nights in the hospital and endured multiple surgeries, six rounds of chemotherapy, 14 days of radiation, two stem cell transplants and infusions of an immunotherapy drug.

There were bad days along the way – she vomited constantly during the initial chemotherapy, and the immunotherapy caused extreme pain and hallucinations. But mostly Katie remained cheerful, fun and sassy while her mom and dad took turns living at the hospital.

“It was like running a marathon at a sprinter’s pace,” Jennifer Belle says. “By the time it was done, I was a puddle on the floor.”

The family’s endurance paid off. Though scans showed bright spots in Katie’s skull and in one of her lymph nodes after she finished treatment (a sign that some neuroblastoma cells might have survived), the spots slowly disappeared over the next few months.

And Katie wasn’t alone! The study’s results, released in 2016, showed that 73% of kids who received two transplants and immunotherapy survived for more than three years after treatment, compared to just 56% of children who received the standard treatment.

The results were so promising that the approach was quickly embraced as the standard of care throughout North America.

Katie is now six years out from treatment and it’s so unlikely her cancer will come back that she no longer needs follow-up scans to make sure she’s cancer-free.

“We would have taken Katie anywhere in the world to get the right treatment, but Dr. Park and Seattle Children’s are the best of the best,” Belle says. “We’re so lucky to have them in our backyard.” 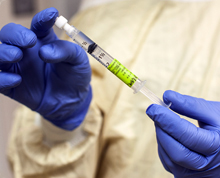 Ordinary tubes like this transport something extraordinary: T cells that have been modified to defeat cancer cells – a promising new approach that could revolutionize how cancer is treated.

Park is also working with Dr. Michael Jensen to develop therapies that use reprogrammed T cells to find and kill neuroblastoma cells with less chemotherapy and radiation.

This approach is showing great promise in research studies for leukemia (a cancer of the blood), but neuroblastoma poses a bigger challenge because it can block T-cell attacks. Park and Jensen are designing ways to break through those defenses. Their latest approach coaxes the modified T cells to multiply in large numbers once they’re in a child’s body. This could create T-cell armies big enough to overwhelm neuroblastoma tumors.

“We have a long way to go, but we’re learning fast and we’re going to keep improving these therapies until we can, hopefully, cure more kids,” Park says.

Her commitment is echoed throughout Seattle Children’s, where we’re exploring new treatments for hundreds of childhood diseases.

“Research is the only way to improve care and find cures for kids and families. That’s why we’re so committed to it,” says Dr. F. Bruder Stapleton, Seattle Children’s chief academic officer.

The Belles are so inspired to support Park’s research that they’ve led everything from lemonade stands to fundraising dinners, bringing in more than $500,000 since 2010.

“Research is the only way to improve care and find cures for kids and families. That’s why we’re so committed to it.”

“Cancer is the number one cause of death by disease among children, so we were shocked when we learned that there’s very little federal funding for pediatric cancer research,” Belle says. “It’s incredibly important that families like ours step up and help researchers develop the next wave of treatments – if we don’t do it, no one will.”

Your support is crucial

Our researchers are transforming the way cancer is treated and helping more children lead longer, healthier lives with fewer side effects. Some of our advances are incremental improvements. Others are breakthrough discoveries. All of them are made possible with investments by people like you. Your generous support helps fund clinical trials like the one that saved Katie’s life and gives our scientists the time they need to develop new ideas that accelerate better treatments and cures.

Find out how you can help us develop new therapies for neuroblastoma and many other types of cancer. Contact Erika Kreger at 206-987-8042 or by email.

Neuroblastoma had spread through Tiago Viernes’s body by the time doctors diagnosed it in 2016. The odds would have been stacked against Tiago just a few years ago. But he was among the first wave of kids to benefit from research led by Dr. Julie Park that showed a new treatment approach – including two stem cell transplants and an immunotherapy drug – helps more children survive.

As Tiago’s family moved from their home near Yakima to Seattle for treatment, they found hope in the fact that 73% of kids who got this new regimen lived for more than three years after treatment, compared to just 56% of children who received the standard approach of one stem cell transplant.

“It made a huge psychological difference that the numbers were on our side – we knew that Tiago really could be cured,” says his father, Conan Viernes.

Today Tiago is in remission, a 3-year-old who loves trips to the candy store and watching music videos on YouTube.

“We’re so grateful to the families who came before us and signed up to test these new treatments without knowing they would help,” Viernes says. “Thanks to them, so many more kids are going to beat neuroblastoma, and I hope it’s only going to get better from here.”