Our epilepsy monitoring unit records seizures as they occur to pinpoint their source and provide families a path forward. For nine years, AJ Cameron (at right, with family) couldn’t participate in typical activities because of recurrent seizures. Data from the week he spent in the epilepsy monitoring unit showed that surgery could remove the seizure-causing tissue without impairing brain development or function. The life-changing operation opened up new opportunities for the North Pole, Alaska, teen.

Tiny electrical charges sparked by biochemical reactions race furiously between more than 100 billion neurons in the brain. The signals they send flash across cellular circuits to direct our every blink and breath.

AJ Cameron was 7 when a violent electrical surge overloaded the circuits in his brain with terrifying results. “It came out of the blue,” recalls his mom, Brittney Cameron. “I heard him hit the floor and thought he rolled out of bed. I came around the corner and he was in the middle of a grand mal seizure.”

The seizures – up to two minutes long – repeated themselves almost weekly for the next nine years as AJ became a prisoner of a hard-to-treat type of epilepsy called intractable epilepsy. No contact sports. No sleepovers with friends. No warning when a seizure might strike and leave him exhausted. Worst of all, doctors near the family’s home in Mississippi had no idea what caused the seizures or how to stop them.

“We were very fortunate that most of his seizures occurred during the night when he was home sleeping,” says his mom. “Medication reduced the frequency of AJ’s seizures, but as long as the seizures continued, we were stuck on an awful treadmill.” 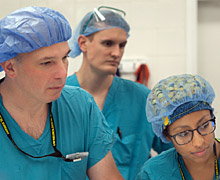 Dr. Jeffrey Ojemann and his team prep before placing a vagus nerve stimulator, a cookie-sized device, just beneath the skin on the left side of a child’s chest. It prevents seizures by delivering small amounts of electrical current to the vagus nerve. Seattle Children’s offers a variety of epilepsy treatments to help children get the type of care that works best for them.

The path to suppressing seizures for kids like AJ involves piecing together data from high-tech imaging equipment that enables doctors to detect abnormal tissue and electrical activity inside the brain.

“It’s a triangulation,” says neurosurgeon Dr. Jeffrey Ojemann. “You need all this data to find the source of the epilepsy and choose the best path forward.”

Some of this information is gathered in our epilepsy monitoring unit (EMU) – the only pediatric EMU in the WAMI region (Washington, Alaska, Montana and Idaho) – where the electrical activity in a child’s brain is recorded and observed around the clock for anywhere from one day to more than a week.

This information, in conjunction with data from other tests, helps doctors diagnose epileptic seizures, identify the source/type of seizures and determine a treatment plan that may include medication or surgery.

Magnetic resonance imaging (MRI) scans and other imaging techniques identify abnormal tissue in the brain where seizures may be coming from, but images alone can’t provide absolute certainty that the suspicious tissue is the source of the seizure. An electroencephalogram (EEG) provides proof by capturing the electrical storms as they occur via strategically placed electrodes.

A conventional EEG lasts an hour or so. That’s long enough to capture baseline snapshots of electrical activity, but usually too short to capture an actual seizure, which may occur only a handful of times a month. That’s where the EMU comes in.

Patients (and a family member) stay in one of the unit’s four rooms for up to a week. A grid of electrodes is placed on the surface of the patient’s skull, beneath the skin and/or into the brain. Patients remain in their room with a family member for their entire stay.

“We want to see where the seizures are coming, but also whether they are similar in nature to what families are seeing at home,” says Dr. Edward (Rusty) Novotny, who leads the epilepsy program.

Cameras complement the EEGs by recording telltale physical behaviors associated with the seizures, which provide important clues to their source but can be subtle and difficult to thoroughly observe in real time.

Nearly half a million Americans age 17 and younger live with some form of epilepsy.

“Disruptions in different parts of the brain may show up as different behaviors,” Ojemann explains. “Patients may rub their face a certain way or tug at their clothes or turn their head to the left or right. The behaviors that occur before and during a seizure help determine where they start and which brain functions are affected.” Carmen Conforti was diagnosed with intractable epilepsy at age 3. Though her parents, Carolyn and Steve Conforti, wrestled with the decision to try a relatively new surgery to remove the part of Carmen’s brain where her seizures started, they trusted Dr. Jeffrey Ojemann and his team and were thrilled that the 10-hour procedure was a success. In 2012, the Confortis established the Carmen Conforti Endowment for Neurosurgery Research to support the integration of research and clinical treatment. In September 2017, Carmen began her first year at Pepperdine University.

Nearly half a million Americans age 17 and younger live with some form of epilepsy, according to the Centers for Disease Control. Their seizures can be as mild as short staring spells or as severe as the punishing electrical storms that wracked AJ on a regular basis.

Epilepsy can arise at any age, but children are especially vulnerable to lasting injury because the seizures can interfere with their still-developing brains. The longer they’re bombarded by seizures, the greater their risk for learning disabilities and other harmful outcomes.

AJ’s seizures have not held him back in school, but they have kept him off the school rifle team, stopped him from getting his driver’s license and prevented other pursuits. The week AJ spent in the EMU last spring gave his doctors the final bits of data to realize that surgery could safely remove the seizure-causing tissue without impairing brain development or function.

The results were immediate. AJ, who had been having seizures almost every week, was seizure-free for 65 days following surgery and had only one seizure in the weeks that followed.

More follow-up care may be in his future, but his family – now living in North Pole, Alaska – is grateful for the progress that’s already been made.

“After living with AJ’s epilepsy for nine years, we can finally see a light at the end of the tunnel,” his mom says.

“After living with AJ’s epilepsy for nine years, we can finally see a light at the end of the tunnel.”

Families currently must wait two months to get into the EMU. We hope to double the size of the unit to eight rooms by the end of 2018. The EMU also is exploring using a wireless EEG system to give patients more freedom of movement.

“The EMU can be confining, so we try to make a child’s stay there as comfortable as possible,” says neurologist Dr. Christopher Beatty. “Child life specialists, art therapists, music therapists and service dogs are some of the ways we try to make the experience less daunting.”

In the EMU patients are temporarily weaned off epilepsy meds and subjected to possible triggers like exertion and sleep deprivation to help induce seizures. An experienced team of medical providers ensures patients are safe when seizures occur.

“In the end, families want to get to the bottom of things and improve their child’s life.”

Technicians in a control room monitor patient EEG readings 24/7. Providers are always just steps away from the patient rooms. And an attending epileptologist is always on call.

Yet even in such a medically safe environment, families still must cope with the idea of intentionally causing their child distress.

“That can be difficult, but the EMU is the safest possible place for a seizure,” says Shelley Gregory, who supervises the EMU. “In the end, families want to get to the bottom of things and improve their child’s life.” Active and playful, Owen O’Bryan, 4, of Ketchikan, Alaska, had his first seizure at age 6 months. His parents and his doctors are still working to find an approach that will eliminate the seizures that occur irregularly and can last from a matter of seconds to a half hour or more.

Doctors chalked up Owen O’Bryan’s first seizure (at age 6 months) to fever. He was seizure-free for the next five months before a cluster of episodes led the Ketchikan, Alaska, family to Seattle Children’s, where doctors determined that Owen has a form of epilepsy in which seizures begin in multiple locations.

“We’ve tried seven or eight medications and a modified ketogenic (high fat, low carbohydrate) diet but nothing has worked,” says Owen’s mom, Melissa O’Bryan. “We haven’t given up on eliminating the seizures, but at the same time we have to prepare for a future where Owen might grow up with seizures.”

“That information is important to parents because it can show signs and patterns of delays,” Owen’s mom says. “That may not be what we want to see, but it guides our treatment decisions so we can give our son the safest and best quality of life.”