Traditional medicine says what you eat doesn’t affect disease. But we’re proving that a diet can stop a lifelong disorder. By the time Flora Martinez was diagnosed with IBD, she was too weak and tired to play at recess. She achieved remission after just four weeks on the specific carbohydrate diet. She is still in remission more than a year after she began and goes to gymnastics and soccer several times a week. 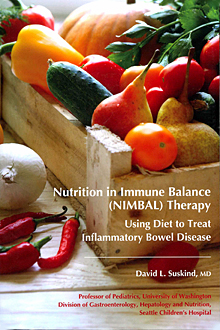 When Flora Martinez started feeling mysterious stomach pain in 2016, her mom, Nadine Martinez, assumed it was an ordinary tummy ache. Then the pain started keeping Flora home from school and her weight plateaued. When Flora confided that she’d been having a more alarming symptom – bloody diarrhea – her family rushed her to Seattle Children’s Emergency Department.

Tests revealed the 8-year-old had a form of inflammatory bowel disease (IBD), a lifelong condition that strikes when the immune system mistakenly attacks the digestive tract. IBD makes it harder to absorb nutrients and can delay puberty and development. It can also cause incessant diarrhea, severe pain and other symptoms that make it hard to go to school or participate in sports and activities.

“I couldn’t stop worrying that Flora was going to suffer for the rest of her life,” Nadine Martinez says.

Making matters worse, standard treatments – drugs and steroids that suppress the immune system – only work for 30% to 50% of patients. After six months of being treated with immunosuppressants, Flora’s IBD flared up so badly that she was doubled over in pain and ready to try something new.

Luckily, her doctor, Dr. David Suskind, is spearheading clinical studies on an innovative diet that is putting some IBD patients into remission without drugs or their side effects.

“The traditional view in Western medicine is that diet and nutrition don’t affect disease,” Suskind says. “We’re turning that on its head by showing that completely changing what you eat can stop IBD in its tracks.”

Normally, the immune system lives in harmony with the microbiome – the community of bacteria that inhabits the digestive tract. With IBD, which includes Crohn’s disease and ulcerative colitis, the immune system spins out of control and tries to eradicate some of those bacteria.

The disease often emerges around the start of adolescence – the average age of diagnosis is 12 – and its embarrassing symptoms can complicate life at a time when kids are forging identities and building friendships. Imagine always sitting near the classroom door so you can rush to the bathroom, and carrying extra underpants in case of an accident.

“A lot of kids with IBD feel tremendously self-conscious, and that often leads to anxiety and depression,” Suskind says.

Suskind had spent years looking for treatments that could help families who don’t have success with immunosuppressants or want to avoid them because they increase the risk of health problems like anemia, cancer and diabetes.

Then, in 2014, a patient and their parents told Suskind that their symptoms had disappeared after following a strict diet that removes carbohydrates, dairy products and most sugars.

“I looked at their test results and almost jumped out of my chair – their disease was in remission,” Suskind says.

He immediately wanted to study the diet, called the specific carbohydrate diet (SCD), but knew it would take years to figure out if it was a viable medical treatment.

“The world is full of claims that particular foods or diets can alleviate health problems,” Suskind says. “We decided to be one of the first to put those claims to the test, by studying the SCD as rigorously as any other new treatment.”

Suskind pulled together funding from families and foundations to launch the world’s first studies of the SCD. The goal is to stop IBD by creating a healthier bacterial community in children’s bodies.

“Traditional funders, like the National Institutes of Health, were pretty skeptical at first,” Suskind says. “We’re incredibly lucky to have patient families who helped us get our research off the ground.”

His first study confirmed the SCD’s game-changing potential: Eight of the 10 patients who stayed on the diet for 12 weeks saw their IBD go into remission.

Flora participated in a later study, with the same dramatic results: Her pain and symptoms started fading two weeks after she started the diet in early 2016, and they haven’t come back. Flora’s lab tests no longer detect excess inflammation, and the SCD’s impact on her and other research participants gave Suskind evidence to prove the diet’s power to larger funders.

Last year, he and his collaborators at Cincinnati Children’s Hospital Medical Center landed a federal grant to run the first large study of the SCD. The study includes pediatric hospitals across the country and investigates two versions of the SCD to see if they reduce symptoms and inflammation.

“We’re incredibly lucky to have patient families who helped us get our research off the ground.”

“If we show the diet works for a critical mass of patients, it could pave the way for doctors to offer it throughout the world,” Suskind says.

Rhiannon Donahue was in eighth grade when she was diagnosed with IBD in 2015. After Suskind explained Rhiannon’s treatment options – including medication and diet therapy – her family worried that immunosuppressants would be too hard on her developing body. So Rhiannon’s mom, Christine Ciancetta, read everything she could about the SCD and decided her whole family would follow it at home.

That meant giving up processed foods and comfort foods like pasta and bread, and making everything – from almond milk to non-dairy ice cream – from scratch. It also meant finding recipes that were heavy on fruits and vegetables but still appealing to kids.

“It was pretty overwhelming and there was a lot of trial and error, because some foods that were traditionally on the SCD upset Rhiannon’s stomach,” Ciancetta says. “But once we figured out what worked, her symptoms went away.”

The SCD also stopped another condition in Rhiannon: primary sclerosing cholangitis, which has no known treatment and is so damaging to the liver that it can lead to a liver transplant.

“It shows that we might be only scratching the surface of the SCD’s potential,” Suskind says.

When Kim Braly started helping families adapt to the specific carbohydrate diet, she decided to try it herself. “I learned that it’s incredibly easy to slip up. Now I remind families that they can’t be perfect – and they need to stay positive when they make mistakes.”

Physically, Rhiannon is back to a normal adolescence that includes playing on her high school volleyball team. But being on the diet can make her feel left out.

“Sometimes you just want to share a bag of chips with your friends,” Rhiannon says.

Suskind and Kim Braly, a dietitian on his team, are investigating ways to expand the food options available on the SCD. They’re finishing a study that looks at how three different versions of the diet (including a vegan version) affect IBD.

They also encourage some patients to experiment with adding back foods after they’ve successfully adapted to the standard version of the diet. Rhiannon, for instance, recently was able to start eating rice and potatoes again, making the diet easier to stick with.

“Every child’s body is different, and we suspect there are less restrictive versions of the SCD that will work for some kids and be easier to follow,” Braly says. “The key is to find an eating plan that is sustainable so they can continue to reap the benefits.”

After seeing so many patients have success with the SCD, Seattle Children’s became the nation’s first hospital to offer the diet as a standardized treatment, as opposed to leaving families to experiment on their own. Families with IBD have come from across the country – and as far away as England – to learn how the SCD can help them. Suskind and Braly also regularly field calls from physicians and dietitians who want advice on making the SCD work.

“The SCD isn’t right for every patient, but we’re excited to give doctors a new tool in their tool box,” Suskind says. “We’re hopeful that our research can open the door to a new treatment paradigm where conventional doctors use diet to help people overcome not just IBD but many other diseases.” Dr. David Suskind (at left with Flora Martinez) goes out of his way to joke and laugh with patients. “I hope it reminds them that their disease doesn’t define them – they’re still kids and they can still have fun.”

Suskind suspects that the specific carbohydrate diet (SCD) does what traditional treatments don’t: It addresses an underlying cause of inflammatory bowel disease (IBD).

IBD occurs when the immune system attacks the community of bacteria in the digestive tract (known as the microbiome). No one knows why these attacks occur in some children but not others. But research has shown that certain types of bacteria are more likely to trigger IBD.

One of Suskind’s studies genetically sequenced the bacteria in patients’ microbiomes before and after they started the SCD. The research found that the diet dramatically decreased the populations of bacteria linked to IBD.

“We think the SCD starves out the bacteria that trigger IBD and lets other bacteria flourish,” Suskind says.