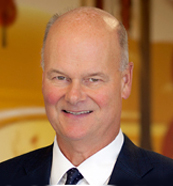 Picha has served in the nonprofit sector his entire professional career, with the majority of that time spent at Seattle Children’s. During his time here, Picha founded the Woodmark Group, an organization that collectively advances the missions of more than 20 of the largest children’s hospitals in North America. Through the Woodmark Group, he also founded the Children’s Circle of Care program, which honors individual and family foundations who give $10,000 or more a year to Woodmark-member hospitals. Since its founding, the Children’s Circle of Care program has contributed more than $5 billion toward pediatric clinical care, research, teaching and advocacy efforts.

A graduate of Washington State University, Picha received the university’s 2002 Alumni Achievement Award. He is a member of the Association for Healthcare Philanthropy (AHP) and a current member and past president of the Northwest Development Officers Association (NDOA). In 1990, Picha received the NDOA Development Officer of the Year award, and in 2006 he received the AHP’s Si Seymour Award, the association’s highest honor given to an individual in the healthcare philanthropic profession.

Outside of work, Picha finds great enjoyment working on his home on Bainbridge Island, especially if it involves growing things.

“Philanthropy is all about possibilities, and there is no better mission to support than that of Seattle Children’s. Connecting the interest of a donor to the work of an institution and seeing them become totally engaged and inspired is fun. It never gets old.”